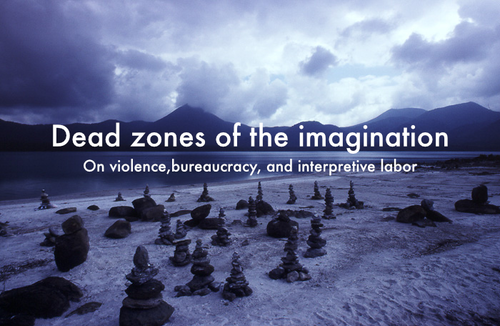 For our first reading group, we discussed David Graeber’s essay “Dead Zones of the Imagination.”

“To care about someone is to imagine the perspectives of that person.“

This is the definition adopted by David Graeber in that essay and the feminist standpoint theorists (e.g. Harding, 2004) before him, and it seems as good a working definition for the Museum of Care as we are going to get. We will discuss the implications for social theory, art, and liberatory politics.

Some comments: David Graeber’s essay “The Dead Zones of Imagination” is an interesting addition to the conversation that I had about Oxford Analytica and dangerous impact on our political life with Michal Kosinski.

Probably the most significant changes in today’s lives is the total surveillance of the entire world population, which is done by machines. David signed his emails with the sentence: “Sent via NSA data collation center, location classified.” According to David’s essay, the ruling class finds itself living in the Dead Zones of Imagination, precisely because it lacks the ability to look at the world through somebody else’s eyes, which means it cannot do care work, creative work. This is why the oppressed confined to violence and stupidity. Think for a moment, what will happen to the machines? They will certainly not be able to imagine themselves in the place of humans. And it will be such total violence, its most brutal and non-applause form.However, this violence will be different from the oppressor’s violence, which is impersonal and, in this sense, divine. Our imagination, our human ability to experience as if we were the Other, not available to the machines. That’s our advantage and all we can hope for.

Here is our Library of Care